Continuing the documentation on the fastai_v1 development here is a brief piece about mixed precision training. A very nice and clear introduction to it is this video from NVIDIA 172.

In neural nets, all the computations are usually done in single precision, which means all the floats in all the arrays that represent inputs, activations, weights… are 32-bit floats (FP32 in the rest of this post). An idea to reduce memory usage (and avoid those annoying cuda errors) has been to try and do the same thing in half-precision, which means using 16-bits floats (or FP16 in the rest of this post). By definition, they take half the space in RAM, and in theory could allow you to double the size of your model and double your batch size.

Another very nice feature is that NVIDIA developed its latest GPUs (the Volta generation) to take fully advantage of half-precision tensors. Basically, if you give half-precision tensors to those, they’ll stack them so that each core can do more operations at the same time, and theoretically gives an 8x speed-up (sadly, just in theory).

So training at half precision is better for your memory usage, way faster if you have a Volta GPU (still a tiny bit faster if you don’t since the computations are easiest). How do we do it? Super easily in pytorch, we just have to put .half() everywhere: on the inputs of our model and all the parameters. Problem is that you usually won’t see the same accuracy in the end (so it happens sometimes) because half-precision is… well… not as precise ;).

To understand the problems with half precision, let’s look briefly at what an FP16 looks like (more information here 43).

To address those three problems, we don’t fully train in FP16 precision. As the name mixed training implies, some of the operations will be done in FP16, others in FP32. This is mainly to take care of the first problem listed aboved. For the next two there are additional tricks.

The main idea is that we want to do the forward pass and the gradient computation in half precision (to go fast) but the update in single precision (to be more precise). It’s okay if w and grad are both half floats, but when we do the operation w = w - lr * grad, we need to compute it in FP32. That way our 1 + 0.0001 is going to be 1.0001.

This is why we keep a copy of the weights in FP32 (called master model). Then, our training loop will look like:

That takes care of problem 1. For the second problem, we use something called gradient scaling: to avoid the gradients getting zeroed by the FP16 precision, we multiply the loss by a scale factor (scale=512 is a good value in our experiments). That way we can push the gradients to the right in the next figure, and have them not become zero. 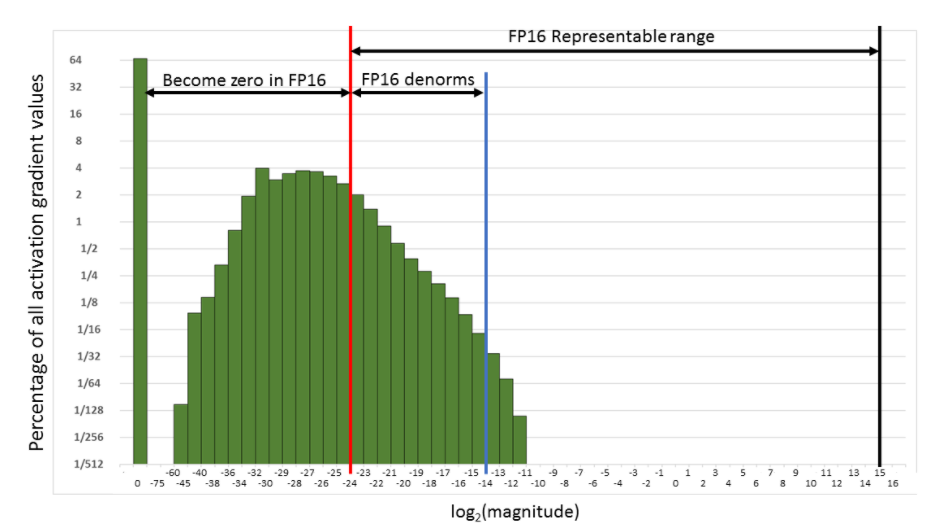 Of course we don’t want those 512-scaled gradients to be in the weight update, so after converting them into FP32, we can divide them by this scale factor (once they have no risks of becoming 0). This changes the loop to:

Implementing all of this in the new callback system of fastai_v1 is surprisingly easy. You can see it in the notebook 004a, and it all fits in one callback where the code is simple to read. In practice, mixed-precision training roughly gives 2x boost of speed. To take full advantage of it check that

For now, this gets a full training of CIFAR10 to 94% with AdamW and 1cycle in 7min20s in a notebook (baseline is 6min45s, the fastai DawnBench entry). There are a few other tricks to add to get there but compared to 13-14min in single precision, it’s still a huge improvement!