We designed TensorFlow for large-scale distributed training and inference, but it is also flexible enough to support experimentation with new machine learning models and system-level optimizations.

This document describes the system architecture that makes possible this combination of scale and flexibility. It assumes that you have basic familiarity with TensorFlow programming concepts such as the computation graph, operations, and sessions. See Getting Started for an introduction to these topics. Some familiarity with distributed TensorFlow will also be helpful.

This document is for developers who want to extend TensorFlow in some way not supported by current APIs, hardware engineers who want to optimize for TensorFlow, implementers of machine learning systems working on scaling and distribution, or anyone who wants to look under Tensorflow’s hood. After reading it you should understand TensorFlow architecture well enough to read and modify the core TensorFlow code.

The TensorFlow runtime is a cross-platform library. Figure 1 illustrates its general architecture. A C API separates user level code in different languages from the core runtime. 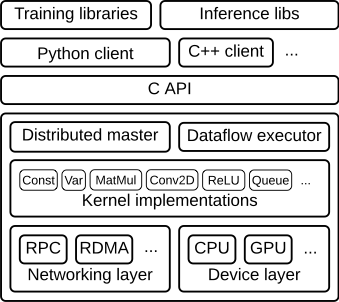 This document focuses on the following layers:

Figure 2 illustrates the interaction of these components. “/job:worker/task:0” and “/job:ps/task:0” are both tasks with worker services. “PS” stands for “parameter server”: a task responsible for storing and updating the model’s parameters. Other tasks send updates to these parameters as they work on optimizing the parameters. This particular division of labor between tasks is not required, but it is common for distributed training.

Note that the Distributed Master and Worker Service only exist in distributed TensorFlow. The single-process version of TensorFlow includes a special Session implementation that does everything the distributed master does but only communicates with devices in the local process.

The following sections describe the core TensorFlow layers in greater detail and step through the processing of an example graph.

Users write the client TensorFlow program that builds the computation graph. This program can either directly compose individual operations or use a convenience library like the Estimators API to compose neural network layers and other higher-level abstractions. TensorFlow supports multiple client languages, and we have prioritized Python and C++, because our internal users are most familiar with these languages. As features become more established, we typically port them to C++, so that users can access an optimized implementation from all client languages. Most of the training libraries are still Python-only, but C++ does have support for efficient inference.

In Figure 3, the client has built a graph that applies weights (w) to a feature vector (x), adds a bias term (b) and saves the result in a variable (s).

Since the master sees the overall computation for a step, it applies standard optimizations such as common subexpression elimination and constant folding. It then coordinates execution of the optimized subgraphs across a set of tasks.

Figure 5 shows a possible partition of our example graph. The distributed master has grouped the model parameters in order to place them together on the parameter server.

The worker service in each task:

We optimize the worker service for running large graphs with low overhead. Our current implementation can execute tens of thousands of subgraphs per second, which enables a large number of replicas to make rapid, fine-grained training steps. The worker service dispatches kernels to local devices and runs kernels in parallel when possible, for example by using multiple CPU cores or GPU streams.

We specialize Send and Recv operations for each pair of source and destination device types:

For transfers between tasks, TensorFlow uses multiple protocols, including:

The runtime contains over 200 standard operations, including mathematical, array manipulation, control flow, and state management operations. Each of these operations can have kernel implementations optimized for a variety of devices. Many of the operation kernels are implemented using Eigen::Tensor, which uses C++ templates to generate efficient parallel code for multicore CPUs and GPUs; however, we liberally use libraries like cuDNN where a more efficient kernel implementation is possible. We have also implemented quantization, which enables faster inference in environments such as mobile devices and high-throughput datacenter applications, and use the gemmlowp low-precision matrix library to accelerate quantized computation.

If it is difficult or inefficient to represent a subcomputation as a composition of operations, users can register additional kernels that provide an efficient implementation written in C++. For example, we recommend registering your own fused kernels for some performance critical operations, such as the ReLU and Sigmoid activation functions and their corresponding gradients. The XLA Compiler has an experimental implementation of automatic kernel fusion.